In the south of Paris, on the Cité Universitaire campus, there is an incredibly beautiful complex built in 1925 named after Émile et Louise Deutsch de la Meurthe. Little England in the French capital. Here, by the way, they often shoot "scenes in London" for French films and TV series. 37 Boulevard Jourdan, 75014 Paris
WE TAKE CARE OF YOU!

Dear guests, our girls measure the temperature every morning! They go outside only in mask and gloves. They ventilate their apartments, change bed linen and towels everyday. Moreover all girls take vitamins - Vitamin D, Zink, Vitamin C. We take care of you and keep all precautions!
Dear clients

If you don’t like the work of our operator or model and you wasn’t satisfied with something that you are looking for, please write to the e-mail to resolve the issue. Your agency

Dear Gentlemen, we are glad to represent Aphrodite Escort

Welcome to European finest Escort Agency - Aphrodite. We are a well established Escort Agency in Europe with the aim of providing a high class service. We are perfectly able to offer you an ensnaring list of Russian Escorts who are no less than the aforementioned paragons of beauty!  We ensure that our Escorts will fulfill your every need, with minute care and offer you comfort and absolute satisfaction.

The beauty and appeal of our Escort Girls will ensnare you for sure.
You will find a variety of types of Russian female escorts at APHRODITE Escort Agency. To make this real possibility happen, what you will have to do is browse our Escorts Portfolio section and select an Escort of your choice. Each profile page contains the Escort girl's recent and genuine photographs.

We offer a reliable, high class and discreet Escort service. Most of our Escorts are available for outcall escort service. To make an appointment or book - just make a phone call and our receptionist will fix your date and time. You can also use our online booking form for this purpose.

We do what it says in the name:
APHRODITE experience as standard! 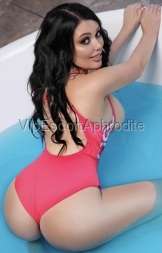